Announced in May 2019, the Kohl Initiative demonstrates Sen. Kohl’s deep commitment to public service and his ethos of civility in public debate and policymaking. The $10 million gift from Herb Kohl Philanthropies extends the reach of that legacy. To date, it is the largest donation in La Follette School history. 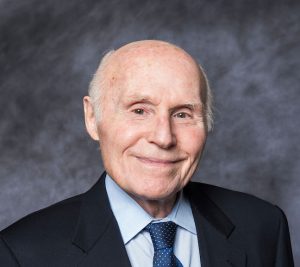 Herbert “Herb” Kohl, a Milwaukee businessman and philanthropist, represented Wisconsin in the U.S. Senate from 1989 to 2013. Kohl received his bachelor’s degree in American institutions from UW–Madison in 1956 and his master’s degree in business administration from Harvard University. In 1970, he was named president of Kohl’s – his family-owned chain of grocery and department stores. After selling the business in 1978, he owned the Milwaukee Bucks professional basketball team from 1985 to 2014.

A lifelong Milwaukee resident, Kohl provided the lead donation for the University’s Division I basketball and hockey facility, the Kohl Center. In 2016, he gave $1.5 million to the La Follette School to create the Herb Kohl Public Service Research Competition. He also created the Herb Kohl Education Foundation, which provides scholarships to students and fellowships to educators throughout Wisconsin.

Sen. Kohl is a founding member of the La Follette School Board of Visitors.

Ready to Lead the Way