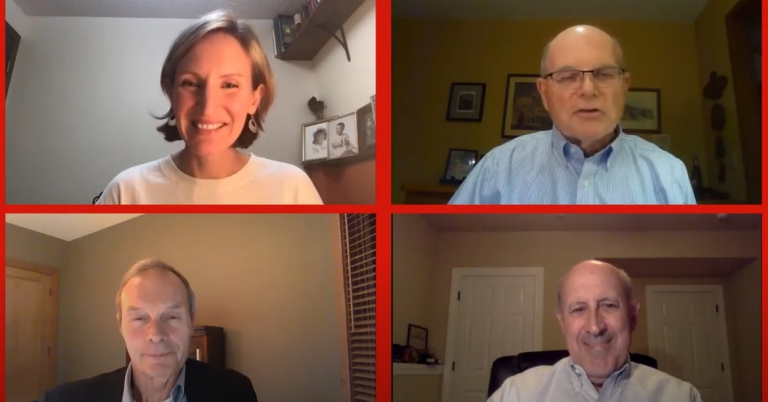 “More than 125 people participated in the livestreamed event, and many others have viewed the video since then,” said Yackee. “This panel discussion and the other events in our Election 2020: A Spotlight on Policy series demonstrate the incredible impact of Sen. Herb Kohl’s commitment to the La Follette School through the Kohl Initiative.”

As president of the UW System that Lucey created, Thompson called the book “a real gem; a very compelling and insightful look at the legacy of one of Wisconsin’s formative political leaders.”

The panelists discussed how Gov. Lucey addressed public policy issues, including his use of task forces and bipartisan commissions. These groups “not only came up with good ideas, but it already created that aura of having support from the time the measures went to the Legislature,” said McCallum, who along with Doyle is an adjunct associate professor for the La Follette School.

Dresang also noted Lucey’s skillful use of the budget process and agenda-setting. “He was very focused on an agenda to get policy changes and to reform state government,” Dresang said. “And he had a great opportunity to do it because he was the first governor in the state of Wisconsin to serve a four-year term.”

In addition, Lucey created the cabinet form of government in Wisconsin, where the governor appoints and leads the executive branch. “Pat Lucey consolidated the powers of the executive branch in a way that has made the governor of Wisconsin a very powerful figure in setting the agenda,” said Doyle, whose parents were close confidants of Lucey throughout their careers.

Lucey also was the first governor to utilize a budget review bill that allowed state leaders to make financial and policy adjustments halfway through the two-year budget, said Dresang, who also discussed the book with students for the Department of Political Science’s 1050 Bascom podcast.

Fifty years after he was elected governor, Lucey’s impact continues to this day, the panelists agreed. He brought together various political groups as the Democratic Party of Wisconsin and appointed the first woman to the Supreme Court (Shirley Abrahamson) and the first African-American judge – Vel Phillips in Milwaukee.

Lucey (1918-2014) often spoke with great pride about how he got more people involved in the political process, said Dresang, who used extensive research conducted by the late Neil Shively and David Adamany in the book.

“(Lucey) was really proud of the work that was done to make voter registration as easy as it is in Wisconsin,” Dresang said, noting his efforts work to remove barriers from voting by absentee ballot, which was used extensively in the 2020 election.