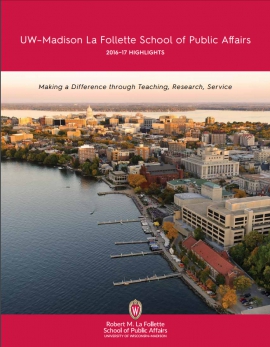 The La Follette School of Public Affairs at the University of Wisconsin–Madison published a 16-page Highlights report in early October. The document showcases the many achievements of the school’s students, faculty, alumni, and staff during 2016 and 2017.

Sections on teaching and learning, research, outreach and the Wisconsin Idea, and alumni in action emphasize the depth and breadth of the school’s reach. For example, La Follette School faculty received funding awards from four of UW–Madison’s five major research competitions, and the school assumed leadership of the highly regarded Wisconsin Family Impact Seminars and the Committee Connect initiative.

An electronic version of the 2016–17 Highlights document is posted on the La Follette School’s website. Printed copies may be requested via email.