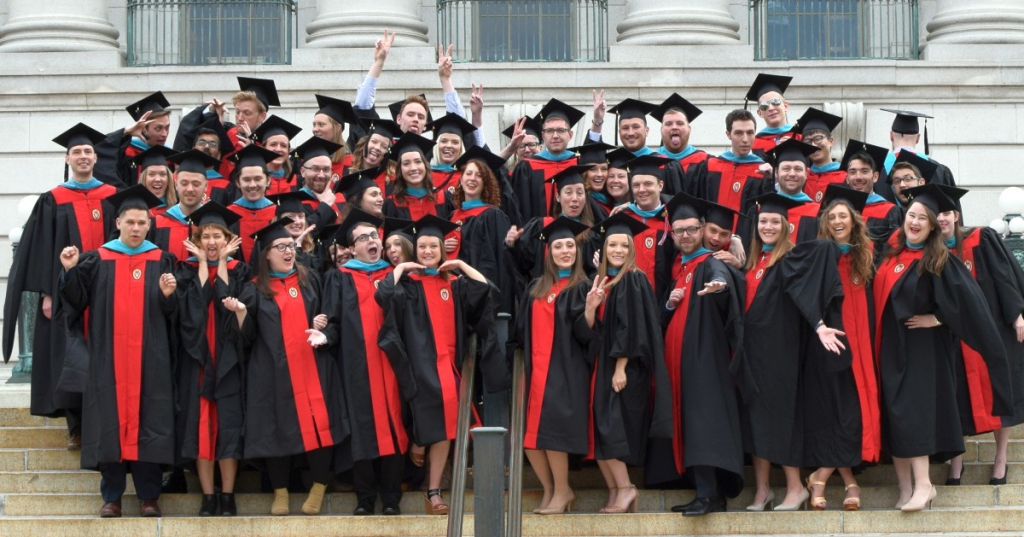 With an emphasis on service, 48 La Follette School students celebrated their graduation Sunday, May 12 in the Wisconsin Capitol’s Assembly Chamber. How fitting, then, that one of the state’s most well-known public servants – former U.S. Sen. Herb Kohl – attended the ceremony.

Unbeknown to graduates and their guests, JoAnne Anton of Herb Kohl Philanthropies began the ceremony by announcing Sen. Kohl’s $10 million gift to the La Follette School. The gift, she said, will allow the School to advance its role as a convener – “bringing people together to debate and make progress on the most important issues of our times.”

Student speaker Claire Zautke (MPA ’19) noted that both of her parents are public servants. “I was raised to believe in putting my neighbors before myself and that there is no nobler calling than to be of service,” she said.

When Zautke asked her classmates what inspired them to study public affairs, she said “being of service” appeared in most of their stories. Like her fellow graduates, Zautke has a long history of service. She was an intern for the U.S. Department of State in France, worked as director of community relations in the Milwaukee County Executive’s office, and in 2013 was the youngest person ever elected to the Milwaukee School Board.

Reflecting on their histories, Zautke and her fellow graduate students also recalled the many changes they had experienced the past two years and the many yet to come.

“But even though this change will be hard, it means we get to go out into the world and ¬affect change. We get to ‘be of service’,” she said. “That desire for affecting change and being of service that comes from a place of love – love of community, love of country, loving our neighbors as ourselves – it’s within our reach. It’s what’s next. It’s ours for the taking. And thanks to La Follette, we can.”

Service also made the top of the list for Assistant Professor Rourke O’Brien, who offered the Class of 2019 three final learning objectives. “Sitting behind your topical interests in transit or healthcare or development or governance, you all share the same vocation or calling to serve,” he said.

O’Brien, selected by the graduates as their faculty speaker, encouraged the graduates “to make explicit your personal philosophy of service.” For his second learning objective – gratitude – O’Brien reminded them that “we, as public servants, must make extra effort to take care of each other, to express gratitude to those serving the public and doing the work we see that others might not.”

Wonder – O’Brien’s third learning objective – is the most difficult and the most essential virtue for a public servant to cultivate, he said. “Why? Why? Because we need wonder to transcend; to transcend setbacks or moments of failure; to transcend the politics of the moment.

“Public service is hard. Even with a personal philosophy of service and the gratitude of our peers, each and every one of us will be tempted to give up, to languish in the futility of it all, to become cynical. The only way to combat that darkness is to develop a practice of wonder,” O’Brien said. “When it appears that progress is impossible to achieve today, revel in how far we’ve come and do your best to make progress possible in the future.”

Former Wisconsin Gov. Jim Doyle, whom the students chose as their graduation speaker, spoke from experience as he echoed the previous speakers’ words. After graduating from UW–Madison, Doyle and his wife, Jessica, joined the Peace Corps and worked in Tunisia for three years. He earned his law degree from Harvard University in 1972 and moved to the Navajo Indian Reservation in Arizona, where he worked in a federal legal services office.

Doyle, who also serves on the La Follette School faculty, recalled a legal experience that taught him the critical importance of humility in public service. “This was about listening to somebody, being humble, listening to who my client was and what my client needed,” he told graduates. “It was not about what it was going to do for my career, about where I was going to be, but it was about him.”

Sen. Kohl exemplifies a humble warrior, Doyle said, “fighting for the right thing but doing it with humility.”